Utilisation of the Catch

Tip: Learning to kill and chill your fish quickly is the secret to obtaining the best quality fish.

Some species deteriorate faster because they have higher levels of blood in their flesh (e.g. kahawai, skip jack tuna). Bleeding these species after capture helps retain the best possible condition.

When storing your catch, a two parts ice to one part seawater (2:1) slurry that covers the fish works best. Cooling the fish quickly to 2-10 degrees is ideal. After 15 minutes in the slurry place the fish on ice in a separate container or in the fridge.

Avoid a thick ice slurry as this can chill fish below -2 degrees and begin freezing the muscle tissue. If you only have one container to chill and store the fish, a thin ice slurry can be the best way to cool and store your catch. Keep a bag of ice on hand to maintain the slurry throughout the day.

Planning
Plan to process your catch as part of your fishing day. Dumping or wasting fish because you ran out of time to process what you killed is unacceptable.
Don’t kill more fish than what you can utilise. Slurried fish are easier to fillet if left in the fridge or ice overnight. They can also last for several days in a slurry, giving the fisher time to utilise the whole catch and share with friends and family.
Iki jime (spike to the brain) for most inshore species is best, some species require a spike directly above the head and some to the side of the head. It is the quickest way to kill a fish and makes for better eating.

A lot of good fish gets wasted. Snapper fillets are 30% of the total fish weight, that means 70% of the fish is wasted if the frame and head is thrown away.

It’s all about respect – make the most of our catch or give it to someone who will. 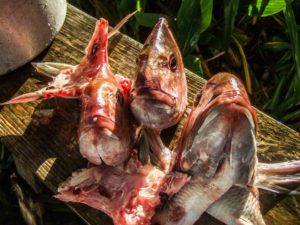 After removing the gills and guts, consider cooking methods that utilise the whole fish.

The backbone sometimes known as the ‘3rd fillet’ is often overlooked but can be dusted in flour and fried. 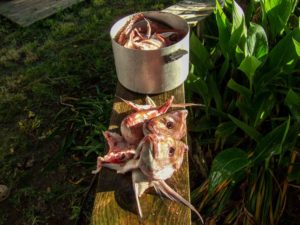 Methods for best utilisation include baking the fish whole (after removing the scales) and cutting larger fish like king fish into steaks. Steaming and boiling the head and frame is a good way to access all the edible flesh as is smoking whole so the flaps, head and frame can be picked clean, utilising the whole fish.

Click here for additional ways to utilise more of your catch.